I was born in England in 1952 and came to Ireland over 30 years ago.  My interest in art stems from this time.  I attended night classes in NCAD and Dun Laoghaire Art School.  I have also studied under Tony Kew, Avoca and Sister Pauline of the Ecology Centre, Wicklow.

My interest in Zen leads me to paint with an immediacy and vibrancy as I seek to capture the richness of the ‘now’.  Many of my paintings show the moon, with its air of feminine mystery.  As a symbol it represents the divine presence in our lives.

My paintings reflect my creative response on an intuitive and meditative level to the world around me.  I take no photographs and do not sketch, but rather allow each painting to evolve from a fragment of colour and inner memory.  As such I seek not to be in control, but more of a channel for the richness of the world around me.

My paintings are in collections in Canada, USA, Australia, England, Ireland and on the Isle of Wight. 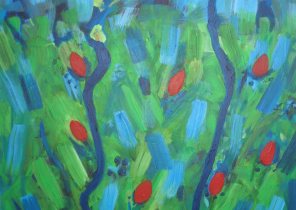 My Profile on New Irish Art